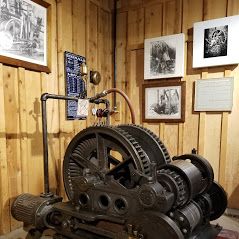 Hoists came in many sizes and shapes. A typical western mine use a hoist like the one pictured (and featured at WMMI). It had 600 feet of cable, powered by steam and capable of lifting 5,000 pounds at speeds of about 600 feet per minute. Large mines used custom designed hoists that could raise up to SIX TONS at speeds of over 1,000 feet per minute!

If only ore or equipment were in the cage, the hoist moved at maximum speed, but if PEOPLE were aboard the cage, the speed was generally reduced. They would often release the cage down the shaft in a free fall, relying on the fragile shoe brake, lined with wood, to stop the descent. Thankfully, larger hoists used more advance gearing and braking systems to stop the cage.

Every man who rode the cage into the mine's depths placed his life in the hands of the operating engineer who sat at the controls.  Responding to a bell signal code, (which differed from state to state), the hoist man raised and lowered the cages to the various levels of the shaft. He relied on marks on the hoist cable or various indicators to determine the location of the cage.  A misunderstood bell signal or a moment of inattention could result in death or serious injury to the miners in his care.   It wasn't until the 20th century that there were any formal qualifications or standardized signaling.

Steam hoists became common in the 1870's and continued in use until the 1930's when electric motors replaced the steam cylinders to propel the drum.

Come see the Hoist Engine and many other WORKING machines at the Western Museum of Mining and Industry.