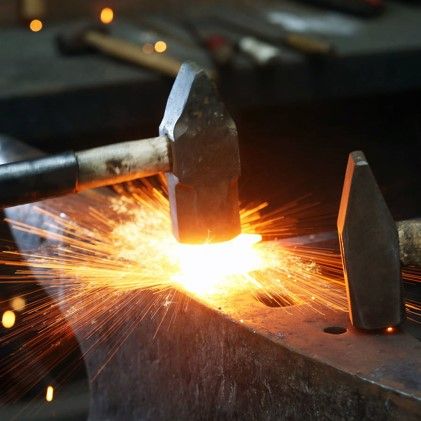 Blacksmithing in the Mining Camps

A blacksmith is an artisan who forms iron or steel into desired shapes by heating the metal to make it soft enough to manipulate with hand tools. It was an important skill in a mining camp or frontier town, where there was no easy access to manufactured goods from the industrial centers hundreds of miles away. A local blacksmith needed only certain raw materials to allow a wide variety of useful items to be produced on demand. A mining operation of any significant size would have a blacksmith shop close at hand, to fulfill the frequent needs of the mining, ore processing, and delivery operations. Typical blacksmith-produced items included shoes for the burros and horses, hardware related to construction (nails, spikes, brackets, hinges, latches, etc.), tools of many types, and hardware for ore carts and wagons. In addition to creating these items for the local mining operations, the smith was also called upon to make repairs to broken equipment.

The basic materials required by a blacksmith were a forge, fuel for the forge, a selection of iron and steel in basic shapes such as rods and bars, and tools for shaping the hot metal. The forge includes a place to contain the fire, and a method to force air through the fire so that it burns hotter, such as a bellows or a hand-crank blower. The fuel would most likely be coal and coke, although charcoal could also be used. Coke is simply coal that has been heated in a “coke oven” to burn off undesirable impurities such as sulphur, leaving almost pure carbon. The most basic tools in the shop would include an anvil, a hammer, and tongs for holding the hot metal. But a realistic blacksmith shop would have dozens of tools to work on objects of many shapes and sizes.

Iron-based materials such as steel come in many different forms. But in the context of late-19th-century blacksmithing, we can consider three broad categories of iron. The first is “wrought iron”, which is almost pure iron, and was a common material through the first half of the 19th century. By the 1860’s, there were improved steel-making processes that marked the beginning of the decline of wrought iron in favor of steel. Steel is fundamentally iron with some amount of carbon added. For many blacksmithing purposes, “mild steel” is the best material, as it has a fairly low carbon content that makes it easy to work with. So, mild steel is the second broad category, with a carbon content below 0.3%. The third category is “high-carbon steel”. As the name implies, it has a relatively high carbon content (about 0.3-1.7% carbon by weight). This type of steel is capable of being hardened, making it suitable for items such as cutting tools and hardened fasteners.

The local blacksmith was a critical part of the infrastructure of a mining camp into the first part of the 20th century. There might be other metalworkers with very specialized skills (such as a machinist), but the blacksmith’s broad skills with iron work made him indispensable to the miners, the mining companies, and the families living in the camps.

The Shop at WMMI

The blacksmith shop here at WMMI is a reconstruction of a shop formerly at the Orpha May Mine, a few miles southeast of Cripple Creek. The physical location of the shop, relative to the headframe, was chosen based on photos of the Orpha May. This indicates how important the blacksmith was to a mining operation, that it needed to be close to the mining operations. The shop is stocked with a collection of vintage tools that are typical of what would be seen in the late 19th or early 20th century.