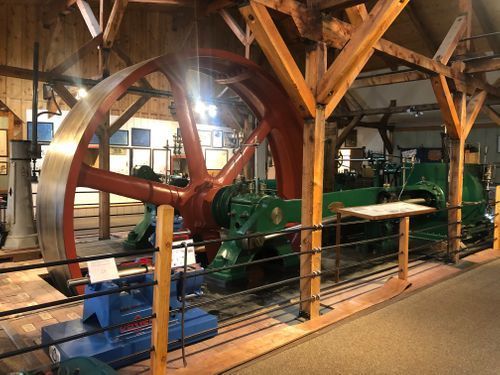 George Henry Corliss was born June 2, 1817 in Easton New York.  Although he received no mechanical training before the age of 24, he was granted a patent for a harness sewing machine in 1843 at age 26.  In 1844, while attempting to raise capital for his invention, he was offered a job by the steam engine manufacturer- Fairbanks, Bancroft and Co.  Only three years later, Corliss was in charge of the company.  In 1863, he bought out the last of his partners. By 1870 the Corliss Steam Engine Company employed over 1,000 men in one of the largest factories in the nation.

In 1849, Corliss received a patent for his Corliss Steam Engine, which had an improved valve system that greatly increased fuel efficiency, allowing for operation at higher speeds and a more precise regulation of speed and power output. His inventive genius was internationally recognized and he was ultimately responsible for 68 patents on steam engines, boilers, pumps and tools.

The Western Museum of Mining and Industry proudly owns a Corliss Steam Engine originally from the 1910 Hollingsworth & Vose paper manufacturing plant located in West Groton, Massachusettes.  In 1972, the company decided to upgrade their power plan and offered this steam engine to any museum that would take it for preservation. WMMI was up for the challenge.  The machine was disassembled and shipped to Colorado Springs. It took 5 months for the engine to arrive via trailers with individual pieces. The Engine was re-assembled and THEN the museum building was constructed AROUND the massive Corliss Engine.

The engine was completely reassembled and run for the first time on July 28, 1982...the day before the exhibit building's grand opening!   The WMMI team takes great pride and care of this piece of history, and actually RUNS this giant engine 2 times every day, at 10am and 1pm.  Join us for a tour and see why we are "the museum that works"