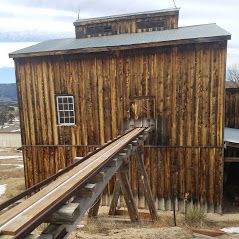 The original Yellow Jacket Stamp Mill was located in the Montezuma Mining District (just west of Denver, CO) and operated up until the 1940's.  WMMI purchased the contents of the mill in 1970 and erected this replica mill building to house the two 5-Stamp batteries and amalgamation tables. This mill is one of only five such mill buildings in the US that are fully operational.

Stamp Mills were invented in the 16th Century by the miners in medieval Europe, known to have been used in Germany and Cornwall, among other places, as a way to crush ore-bearing rock and to separate the valuable gold and silver from the "worthless" material. The original mills were essentially a giant mortar and pestle, using iron stamps weighing between 500 and 900 pounds to crush ore into smaller pieces.  The Stamp Mills were built into hillsides to use gravity to aid the process.

19th Century Millmen made the process more efficient with the use of iron machinery and steam power. Additionally, they used MERCURY, which forms a mixture called amalgam with the gold and silver. The amalgam was then placed in a heavy container and heated.  The mercury evaporated leaving a spongy lump of gold silver and a small residue of the mercury. This "retort sponge" was then remelted and refined in a mint or in the mill itself.

Working in a stamp mill was VERY dangerous work. Aside from working with mercury, the physical design of the stamp mill was full of risk. Larger mills contained more than 200 stamps that worked night and day.  The Mill workers fed the ore into the mechanism.  The stamps were raised about 18 inches then dropped onto an iron shoe crushing the pieces of ore into dust.  Water then forced the sediment through the wire mesh onto an amalgamation table.  The amalgamation table then shook to continue the separation process to find the valuable minerals. The work was loud and constant. The Millworkers were a tough breed with a focused mission.

We invite you to come to the Western Museum of Mining and Industry to see our Stamp Mill in action so you can appreciate the work and sacrifice of those who came before us.  The Stamp Mill runs during our three "Family Days" in the summer where we demonstrate our outdoor machinery.  Come see why WMMI is the Museum That Works.